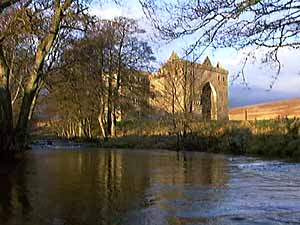 Although a castle has been on this site since at least the 13th century the central part, probably built under the master mason John Lewin of Durham, dates from the end of the 1300's.

A local legend: The Wicked Baron.

One of its earliest and most unjust owners, the wicked Baron de Soulis, had been convinced of his indestructibility by his spirit familiar, who told him that only a rope of sand could restrain him.

Luckily for the local inhabitants, the wise wizard, Thomas of Ercildoune, devised a belt of lead with which he girdled the Baron while he was asleep, and into which he poured sand. Thus restrained he was taken to an ancient stone circle, Nine Stane Rig, about 2 miles north east of the castle, and boiled to death in a vast cauldron.

Throughout the 1400's possession of the castle was much fought over by the English and the Scots and additional fortifications were continuously built around the core until the final form of 1540. By now it was firmly in the hands of the Scottish crown even though its owner, Patrick Hepburn, Earl of Bothwell was suspected of treacherous secret dealings with the English.

This bleak and imposing fortress, set next to the beautiful Hermitage Water and surrounded by open moorland is under the control of Historic Scotland and is open to the public at the following times:
April 1 to Sept 30: Weekdays, 9.30-6.30, Sundays, 2.00-6.30.
If you visit outside the above season, ie; in winter, don't worry!... although you can't get into the ruined interior of the castle you still walk around outside and get a feeling of its extraordinary atmosphere.