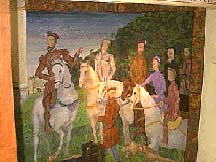 The Auld Alliance, Scotland and France

Mary, Queen of France and Queen of Scotland

Betrothed to the Dauphin François, at the age of five Mary left Scotland for the court of Henri II in France.

She grew up and was educated in France, probably the happiest time of her life. Together with subjects ranging widely from philosophy and poetry to drawing and needlework, she learned Latin, Greek, Italian, Spanish and English, although her preferred language for the rest of her life was French.

Her mentor was the poet Ronsard (1524-85) (left) with whom she corresponded to the end of his life.

Popular and admired at court, she travelled with the royal entourage on progress between the great châteaux of the time: Le Louvre, Fontainebleau, Blois, Anet, Chenonceau and Chambord (illustated here, Chambord was a royal hunting lodge with over 400 rooms.)

She learned to love falconry and hunting in the vast forests around these châteaux.

In 1558 she married the Dauphin (right) at Notre Dame in Paris. When his father, Henri II, was killed in a jousting accident she unexpectedly found herself Queen of France at the age of 17. Only two years later she was widowed when the young François died of an ear infection.

These two drawings of Mary and the Dauphin are from the Bibliothèque Nationale in Paris and were made by Clouet at around the time of the marriage of Mary and François.

On the 14th August 1561 Mary set sail for Scotland. Five days later she had arrived back in Edinburgh and taken up residence in the Palace of Holyroodhouse as Queen of Scotland.

Other Mary Queen of Scots pages: